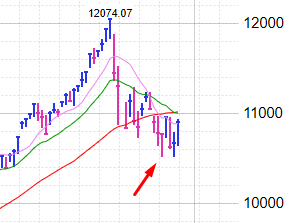 After the long stock market rally came under increasing pressure, IBD changed the market direction to “correction” on Wednesday. But on Thursday and especially Friday, the stock market rebounded. The Nasdaq composite could confirm a new uptrend any day. A slew of leading stocks are setting up or flashing bullish rebounds or early entries.

Target stock has a formed a base while Alibaba has pulled back to its buy point and is finding support at its 50-day line. Nvidia has rebounded from its 10-week line while Broadcom stock has traded tightly amid market gyrations. Sea Ltd. is moving toward record highs in a short consolidation. All five stocks have relative strength lines at or near highs, reflecting their outperformance vs. the S&P 500 index.

But there has not yet been a follow-through day to confirm the new stock market rally attempt. So investors should maintain a defensive stance heading into next week. But investors should game plan for offense and defense.

Why This IBD Tool Simplifies The Search For Top Stocks

Nvidia stock, Tesla, Microsoft are all on IBD Leaderboard, while Alibaba is on the watchlist. Microsoft stock and Alibaba are on on IBD Long-Term Leaders. Nvidia, Microsoft and Alibaba stock are on the IBD 50.

Meanwhile, a federal judge blocked President Trump from banning downloads of  viral video site TikTok. A preliminary deal was struck over a week ago to give Oracle (ORCL) and Walmart (WMT) minority stakes, but China’s ByteDance would still hold 80% and control TikTok’s algorithm.

Join IBD experts as they analyze actionable stocks in the stock market rally on IBD Live.

India now has more than six million Covid-19 cases, closing in on the U.S. But India has far fewer cases per capita than Brazil or the U.S.

New coronavirus cases are at or near record highs in several European countries, which are tightening restrictions. But coronavirus deaths so far remain low.

Apple fell intraday Monday to its lowest level since the end of July, but rebounded that day and closed the week up 5.1%. Microsoft rebounded 3.7%, closing in on its 50-day line.

Tesla fell nearly 8% last week amid Battery Day disappointment, but reversed higher from undercutting its 50-day line Thursday morning and ended the week just above its 21-day. The Tesla stock chart is too volatile right now, needing to calm down before offering a decent entry point.

But Tesla-related headlines are likely to remain active. Tesla may release third-quarter delivery and production figures late next week.

Nvidia jumped 5.6% last week, with a strong rebound from the 10-week line. The chipmaker is working on a short consolidation.

Broadcom has been trading tightly since a breakout from a long consolidation. The Apple iPhone chipmaker has a four-weeks-tight pattern, impressive action given the stock market volatility. The buy point is 379.06 according to MarketSmith analysis.

Target stock held up great during the market correction, holding support around its 21-day moving average and rising 3.7% last week. It now has a flat base with a 156.20 buy point, following a strong rally.

Sea Ltd. stock jumped 5.25% last week, four weeks into a consolidation. It’s been holding slightly above its fast-rising 10-week line. A proper base hasn’t formed, though 165.33 is a potential entry.

The Nasdaq is on the fourth day of its rally, which started Monday, Sept. 21. When we talk about the start of a rally attempt, we usually mean the first up day. But sometimes a rally starts on a down day, but the index closes high in its range, like the Nasdaq did last Monday. Nasdaq almost undercut this “pink rally day” on Thursday morning, unlike the S&P 500 and Dow Jones.

In most cases it doesn’t matter, because whether you start the rally on the “pink” day or an actual up day, the follow-through day ends up being the same. If the Nasdaq confirms its rally attempt from Tuesday on, that would be the case this time.

Because the S&P 500 undercut Monday’s low on Thursday, it’s only on day two its rally attempt. It could have a follow-through day as soon as Tuesday.

Friday’s 2.3% price gain was strong enough for a follow-through, but volume was below Thursday’s.

Still, the action was positive. Not only did the Nasdaq end near session and weekly highs, but Friday’s action was generally a steady, strong ascent, a welcome break from wild intraday gyrations of recent weeks.

Keep in mind that the major indexes are all below their 50-day moving averages, let alone short-term highs. Both of those levels are resistance areas for the stock market rally to cross. It wouldn’t take much selling for the Nasdaq, S&P 500 and Dow to undercut last week’s lows.

The last two days could be yet another head fake, in which the market tempts investors to step back in, only for stocks to quickly resume selling. For now, investors should still have a defensive mindset.

Analyze your stocks, both new buys and longer holdings. Decide which ones you should hold or cut loose.

Limit new purchases, especially if you have a bunch of recent buys that are at or below break-even. It’s not a big deal to be down 2% in a couple small positions with still-healthy charts. But you don’t want to be on margin with 10 stocks that are losing money.

Game plan for the market resuming its slide, especially if the indexes undercut last week’s lows. How are you going to handle your portfolio then?

But investors also should have an offensive game plan. If the Nasdaq stages a follow-through day, that’s a buying signal. Not all confirmed rallies succeed, but if the Nasdaq reclaims its 50-day on the FTD, then quickly moves to surpass its Sept. 10 peak, those would be positive signs that the stock market rally has staying power.

Investors want to be ready. The big winners in an uptrend often break out near the start of a confirmed rally.

Investors should cast a wide net for their watch lists during a correction, looking for quality stocks from a wide range of sectors. Because of the short, sharp correction, if there’s a near-term follow-through, stocks with traditional bases, like Target, will be rare. Focus on stocks with strong relative strength. From that, look for stocks finding support at their 50-day or 21-day, or working on short consolidations.

Having these game plans will help prepare you for bullish or bearish action, both of which are highly plausible. That way you can act decisively when the lights are on.

Most of all, be flexible. With the stock market rally so close to bullish or bearish turning points, you can’t lock your mindset on an intraday swing up or down. On Monday morning, the signs may be bullish. By the close, the action may be decisively bearish. Make sure you adapt.

Read The Big Picture every day to stay in sync with the market direction and leading stocks and sectors.

Market Rally Needs To Pump Up The Volume; 7 Leaders In Buy Zone